ultracrepidarian: a person who criticizes, judges, or gives advice outside the area of his or her expertise.

The usual disclaimer: my employer paid for me to go, but this is my personal take, etc.

So most of the conferences I attend are tech focused: PyCon, Supercomputing, Google I/O, that sort of thing. re:MARS is machine learning, AI, robotics and space, which is why I went, I’m a machine learning engineer these days. But the audience was wild – I met CEOs of aerospace companies, the head of robotics strategy at Amazon and dined with the CTO of a mid-cap German tech company. I can’t recall any tech conference with such good C-level attendees and I really appreciated the opportunity to talk as peers. Or at least fellow attendees. And having Robert Downey Jr as keynote was… boss. 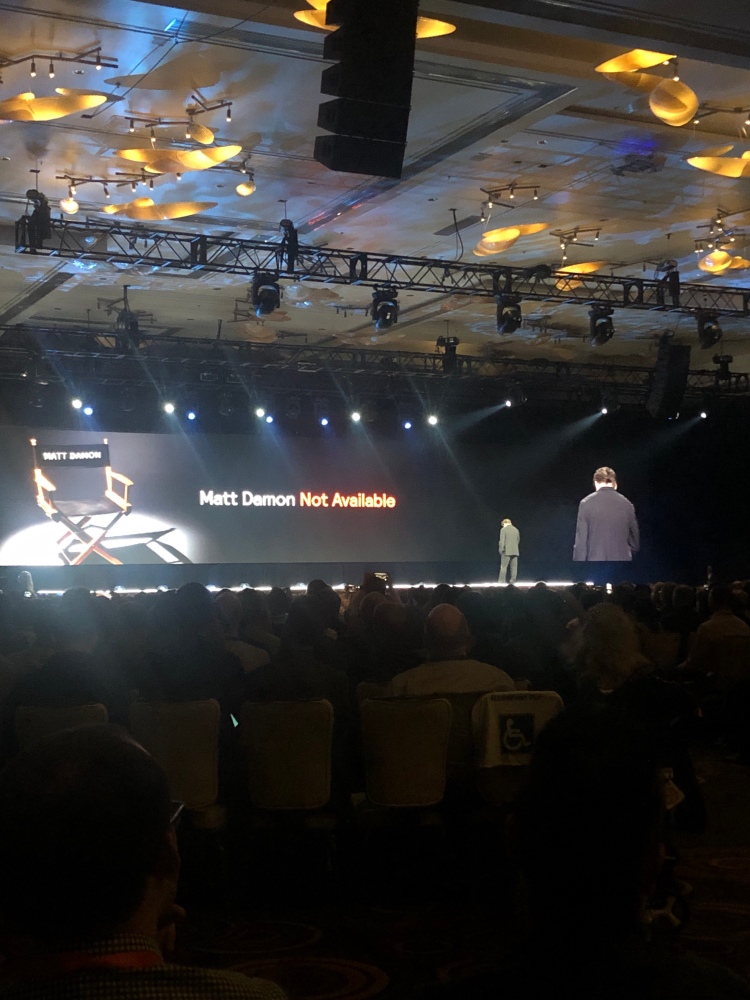 Many of the talks were transparently ads for services or companies. Blech. Some were excellent- the DeepRacer half day was great. I liked very much some of the Ground Truth and Ground Station talks… and wow are those a span. Who’d have anticipated the bookstore becoming a purveyor of 10gbit satellite downlinks?

Machine learning is hugely dominant throughout as expected, with an interesting explanation from a VP that every single project has to explain in their OP-1 plan how they’ll use ML. It’s a requirement now! So if you’re not onboard yet, they opened up their ML course – free! 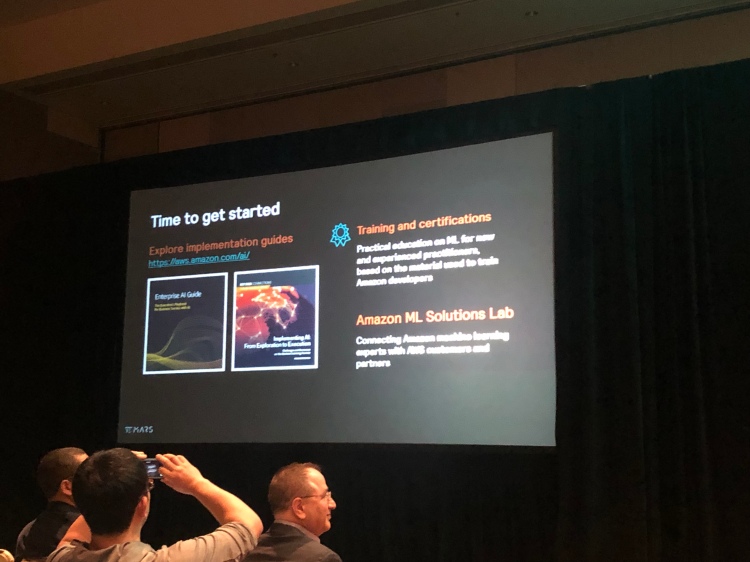 The expo floor was quite cool and over half cool robotics. And spaaaace. 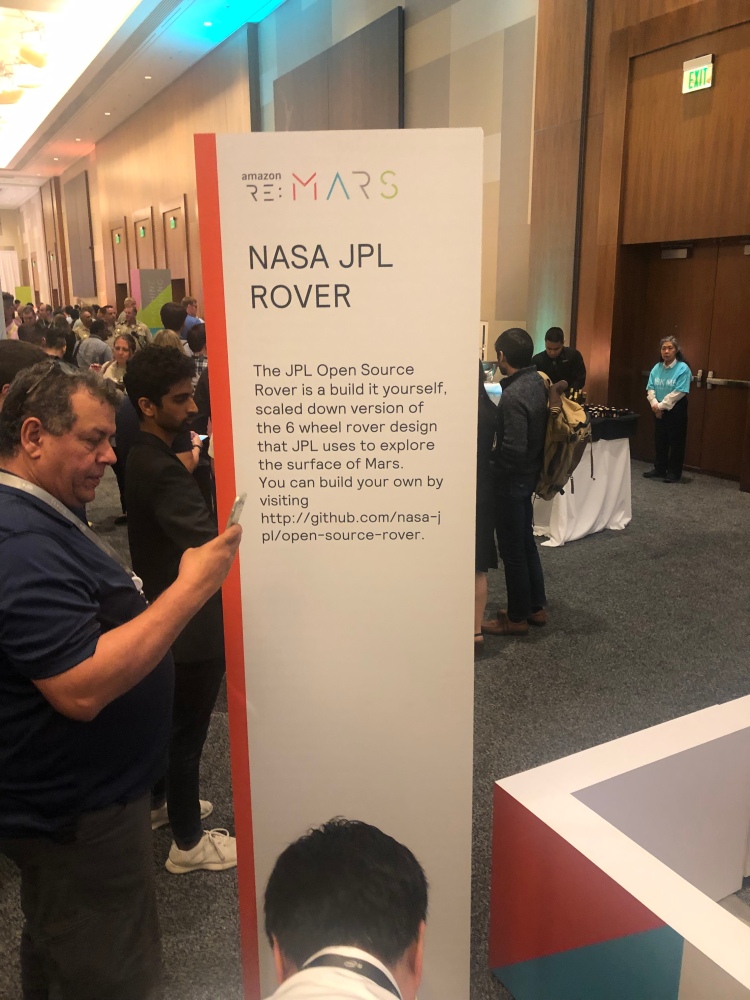 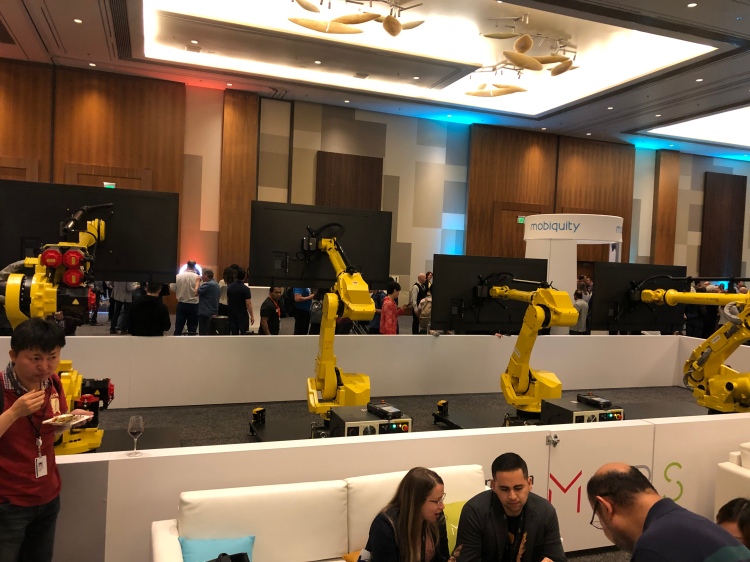 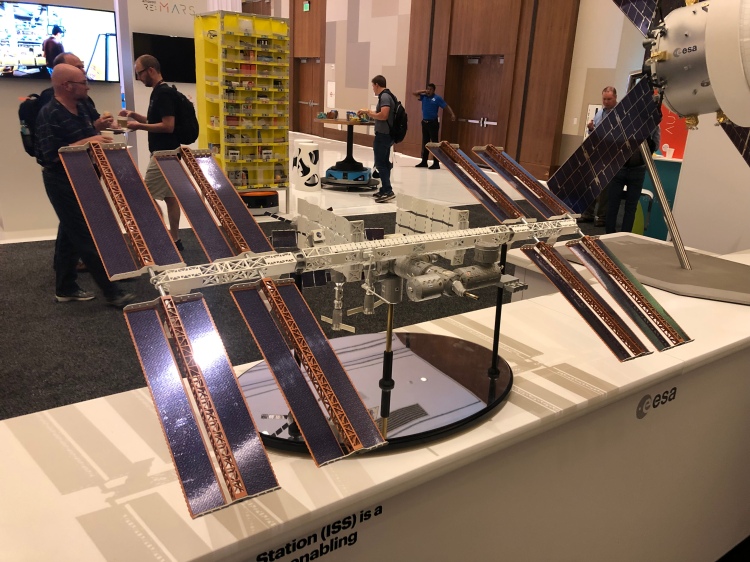 And a selfie bot.

As is often the case, it was 100F outdoors and downright chilly inside. Pro tip, always pack a light layer. Your mom was right. 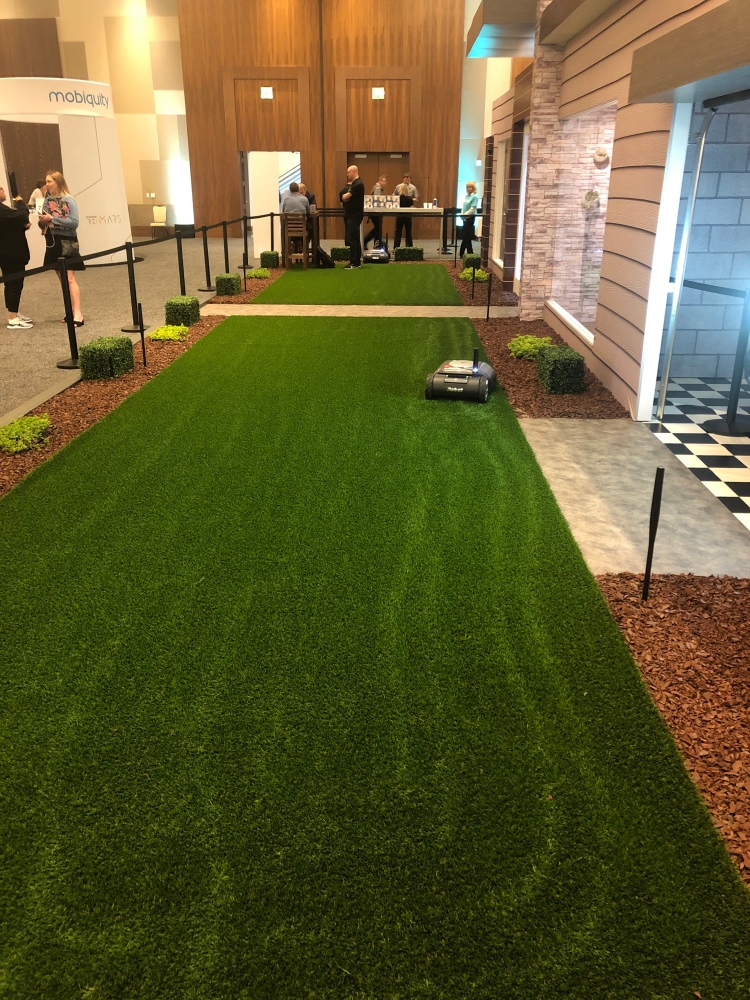 Someday I’ll have a robotic lawnmower.

Rivian had their truck there and I drooled on it. Presumably unaffordable though.

The weather was Vegas summer. I promptly gave up the idea of finding a beach volleyball game as suicidal.

The motor speedway party was epic. The pace car ride was a total blast, being driven 122MPH in, of all things, a stocky Camry SE driven by a former racer. Zoom zoom indeed. 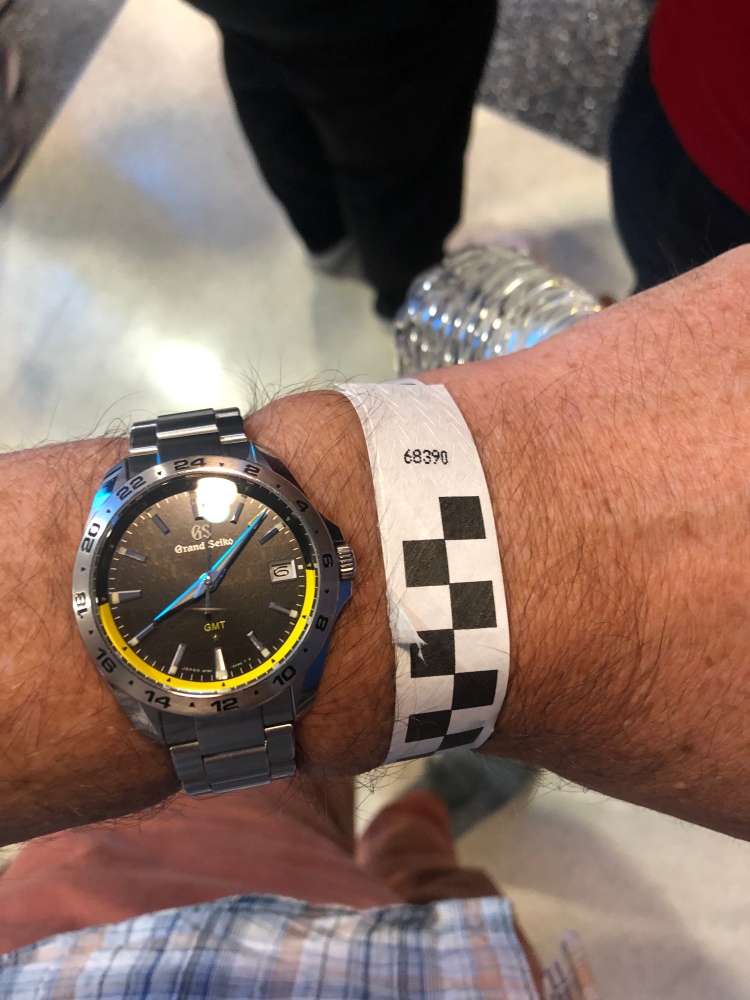 The battlebots bored me, to my surprise. No seats left. 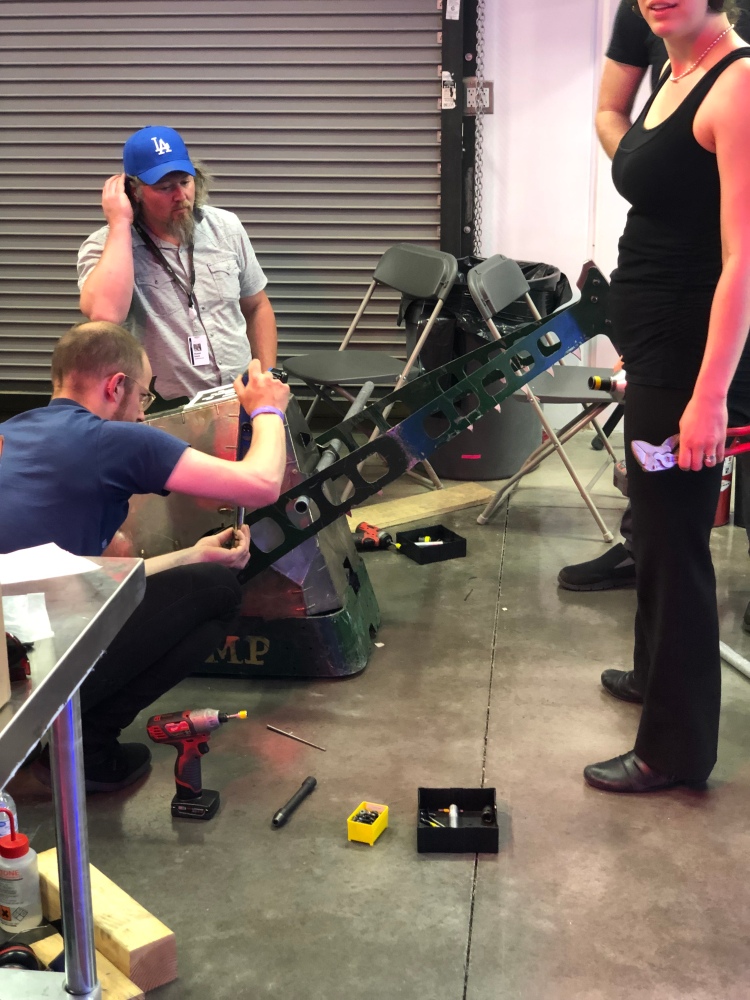 I only sorted this out at the end, but in retrospect Amazon went to astonishing lengths to brand everything. It’s amazing. So signs of course. 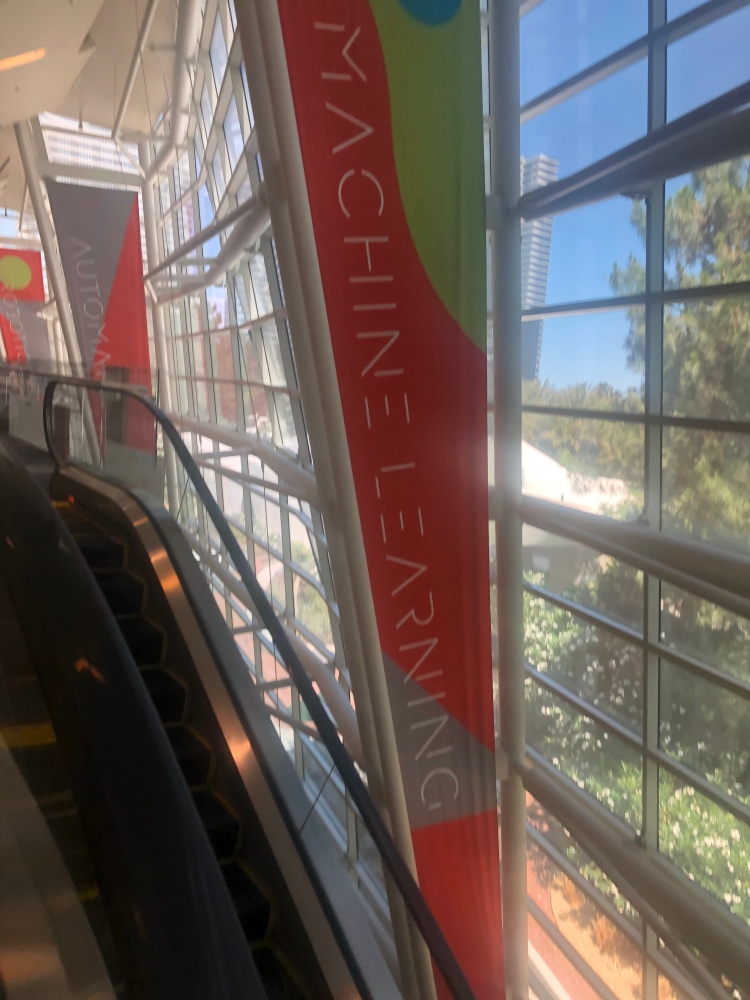 Note the odd size and shape. But covering all logos on the wireless gear? On a 15m ceiling mount even?

And the monitors. All blanked out. Ditto all loudspeakers. An impressive, Steve Jobsian level of attention to detail and message. Tour busses even go co-branding. 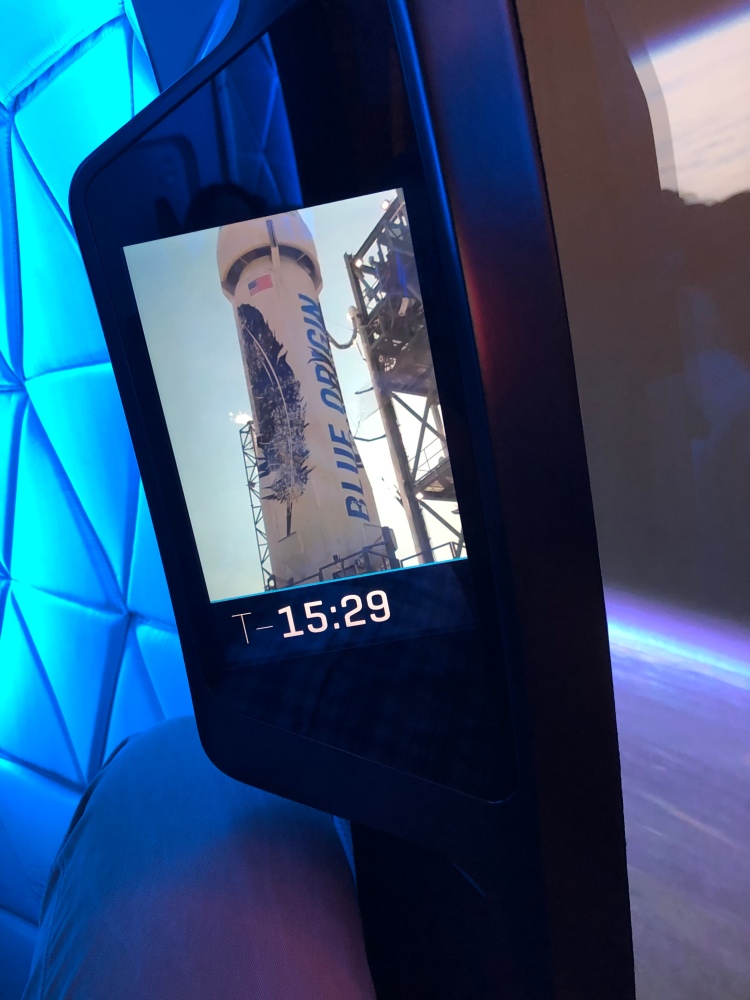 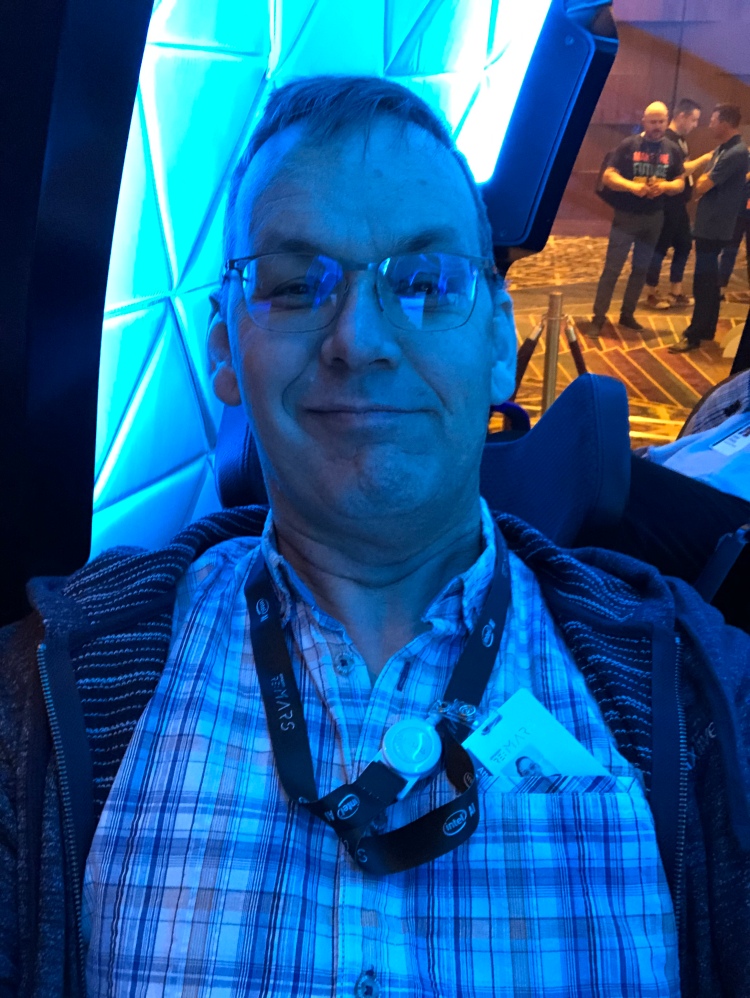 My employer got some great mentions – 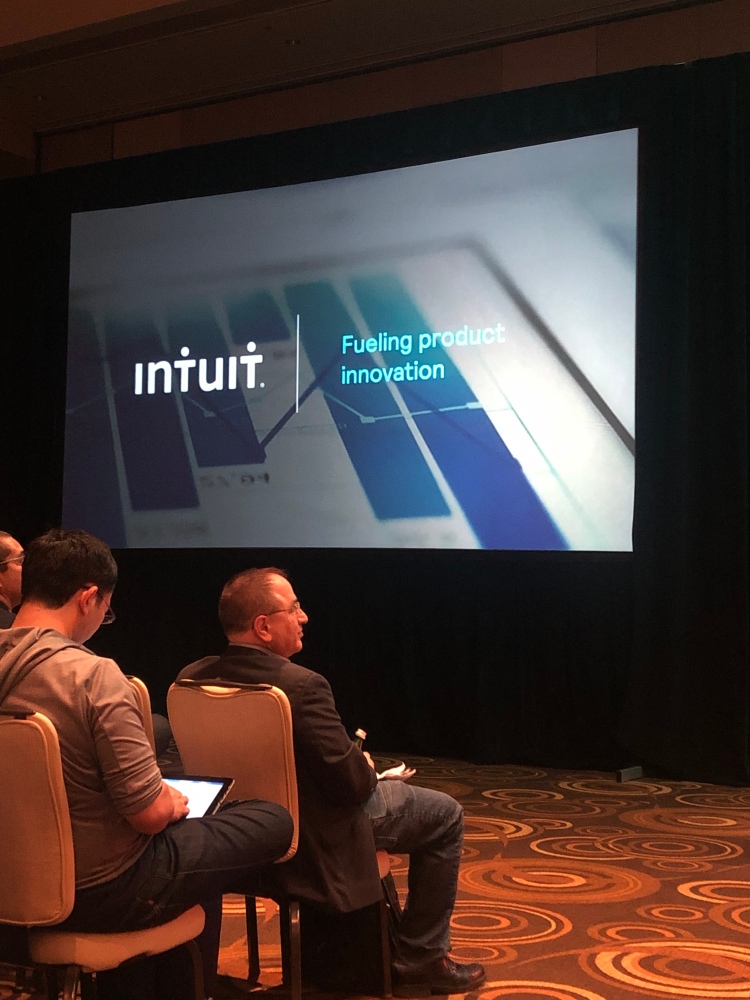 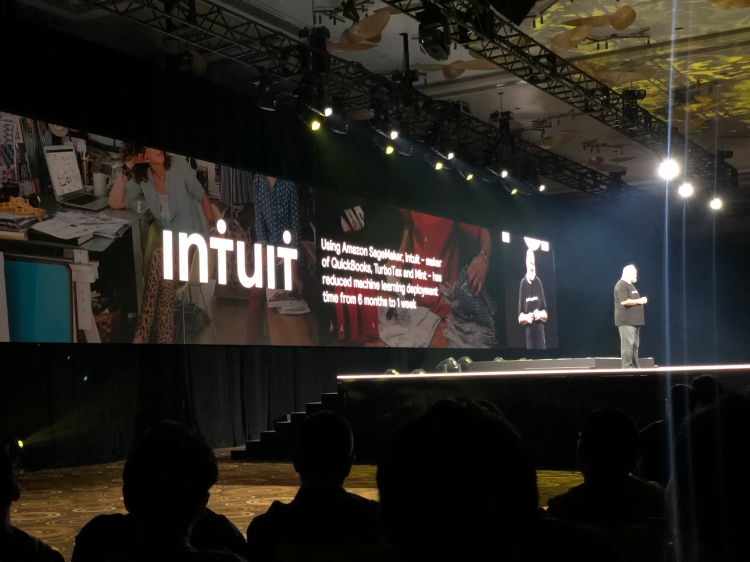 Though I am biased, I think it’s true that Intuit is doing cool stuff in ML. End advert.

Oh yeah, this is tasty and I need to buy some.

If you’ve questions, leave a comment and I’ll answer or append here.

Should you go? Tough call if you look at just ROI – you don’t learn as much tech but the crowd might well be a sound investment. Some of the space talks, for example, had an amazing audience of experts and entrepreneurs. I’ve got an idea for a startup now based on SAR data that I need to investigate, so maybe that’s my personal takeaway. I’m really glad that I got to go.

This site uses Akismet to reduce spam. Learn how your comment data is processed.