San Diego has so far escaped the worst of the 2020 police riots, but I’ve still been keeping an eye out. My primary tool for doing so is ADS-B aircraft broadcasts and the OpenADSB iOS app. Here are some sample traces, showing the police helicopters over the city:

It’s notable that the helicopter probably has unbelievably good cameras (gyro stabilizers with long zoom lenses are better than you think) and could well have infrared also. And yesterday, Timothy Shea brought in the DEA to surveill the protests too. That’s not just human intelligence and AT&T’s massive data; it’s also flying dirt boxes.

What the heck is a dirtbox?

TL;DR – it mimics a cell tower and grabs the unique IDs from a phone. They can also intercept text messages and phone calls, and you should assume that they see all non-encrypted communications. All.

Yesterday, I saw this on the app:

That’s a Cessna 206, owned by the DEA, flying out of Montgomery field and meandering over San Diego. I should have gotten more screenshots, but it flew around for a while and followed the coastline north. I consider this high-probability that they’re flying dirtboxes over our cities and recording who’s at the protests.

Consider donating to the EFF and/or ACLU. Vote when you can.

You see odd things on ADS-B sometimes when you view traces.

Googled and it was an acrobatic plane.

Guess they were doing a routine?

Sometime you see an aircraft flying oddly and wonder. Allow me to recommend an ADS-B app, this is the iOS app OpenADSB:

This one was tracking CA-56. I wonder why?

Anyway, an ADS-B app shows all sorts of interesting stuff. Some time ago it showed FLIR surveilling San Diego:

Anyway, go grab yourself an app, there are others too, and hit the ‘show trails’ button to see where an aircraft has been. Sometimes its quite interesting.

I am beta-testing an iOS app that shows ADS-B flight data, and yesterday this showed up:

The story explains that this plane, a turboprop Pilatus PC12, is owned and flown by FLIR Systems and

…air mission profiles fall into 4 different areas: demonstration, transportation, cargo and engineering. Greg says that approximately 60% of their flights fall into the demonstration category. With a maximum cruise speed of 280 kts, a range of over 1500 nm, and short-field takeoff and landing capabilities of 2650 ft and 1850 ft, respectively, they can take a sensor almost anywhere in the world for show-and-tell to potential customers.

The world’s number one selling law enforcement thermal imager, the Ultra8500 is a compact, stabilized multi-sensor system designed for Pursuit/Patrol and Surveillance missions. This model is based on the 9″ gimbal design, configured for specific law enforcement missions.

So basically FLIR (the company, that is) is circling for hours over a few neighborhoods, capturing video and showing what it can do for potential clients, presumably the local police department. Here’s a snip from the product sheet:

I have the $320 version that attaches to your phone, and even it is surprisingly capable.

E.g. here I used it to look for leaks in a drain, which is easy if you run hot water to provide contrast: 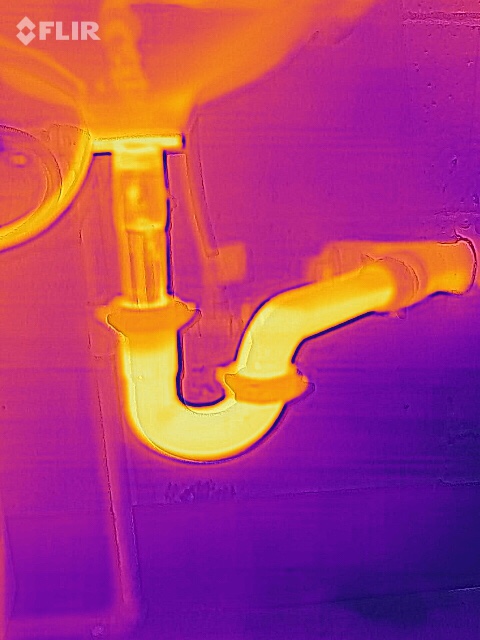 And my server closet – that Airport does run hot.

I’d guess that the airborne version could easily spot grow houses, which matters less now that California has legalized pot. More worrying to me is that fact that, due to a mild climate, many local houses were built with no wall insulation at all, thus meaning that the airborne FLIR can literally see through walls. If you add a dirt box to the plane too, it’s scary as hell.

Here’s the thing: In Kyllo v United States, the Supreme Court ruled that FLIR imaging was a search and required a warrant. What’s a company doing? Is it legal? Are they selling imagery or derived data to law enforcement for the disgrace that is ‘parallel construction’?