As I’ve written about before, I use RSS several times a day to keep track of news from hundreds of feeds. A key part of making that work is the underlying question of “Where’s the RSS feed for this?”

Usually the Fever bookmarklet can find it, there’s a defined HTML tag that it can parse from a page. But sometimes the page doesn’t have a feed. Here are a couple of ways to find or create one.

So here’s the thing: the world is a big, busy place, and there’s a lot going on. You probably need to keep an eye on it. I probably don’t need to tell you that Twitter is full of bots and Nazis, Facebook is a horror show and just searching for a term can lead to ads following you around the internet. How to cope?

As a computer engineer, I also have to keep up with a bunch of topic areas, and if there’s time I want to read about my hobbies, interests and passions too. And if I’m up at the wee hours, I’d like to have something to read. Let me show you how to do it!

I thought that everyone knew about these, but this week a web-dev co-worker was surprised by them, so I’ll explain. If you create a folder in your browser bookmarks, then you can open all of them at once. Here’s my morning tabs in Safari:

If you click on that last thing, Open in New Tabs, you get this:

I also use iCloud to share my bookmarks across machines, so when I update my tab sets they also go to my iPad and iPhone. Useful, and only takes a few KB so the free 5GB iCloud plan suffices.

To block ads, you need defense in depth. Here’s my current system that I recommend:

This is more difficult. The PiHole helps if they are hosted on an ad server, but my best tools is youtube-dl. It’s a deceptively powerful, self-updating, open-source Python app that can download from YouTube, Vimeo and many others. You can grab a video, extract the audio if you want, and save it for later, minus the ads. Brilliant.

RSS is your secret weapon

Wired has it right, it’s time for an RSS revival.

Five years ago, when Wolf took over The Old Reader, he offered a prescient insight: “How long will it be before your Facebook stream is so full of promoted content, bizarre algorithmic decisions, and tracking cookie based shopping cart reminders that you won’t be getting any valuable information,” Wolf wrote. “For as little as $60, a business can promote a page to Facebook users. It won’t be long before your news feed is worthless.”

Personally, I’ve been running RSS for over a decade, and currently have 411 RSS feeds:

With the demise of Fever it’s no longer possible to replicate my setup. Which sucks; running your own RSS server on your own computer really is ideal from a privacy and performance perspective. So I’ll try and recommend alternatives.

The Wired post is a good place to start, and I know that friends of mine are partial to The Old Reader but I’d want to dig into anything offered for free and figure out how they pay the bills.

One of the downsides of 411 feeds it that it’s more than you could ever read, though I admit I’ve tried. Here’s what I recommend:

Get a native app

This is more subtle, but native apps work better for me: speed, key bindings, SPEED and better OS integration with features like sharing, printing, and so forth.

For iOS, I recently switched from Reeder to Unread, mostly because Unread is much faster to refresh from my server. Speed matters.

On my Mac, I still use Reeder, where it works fine: 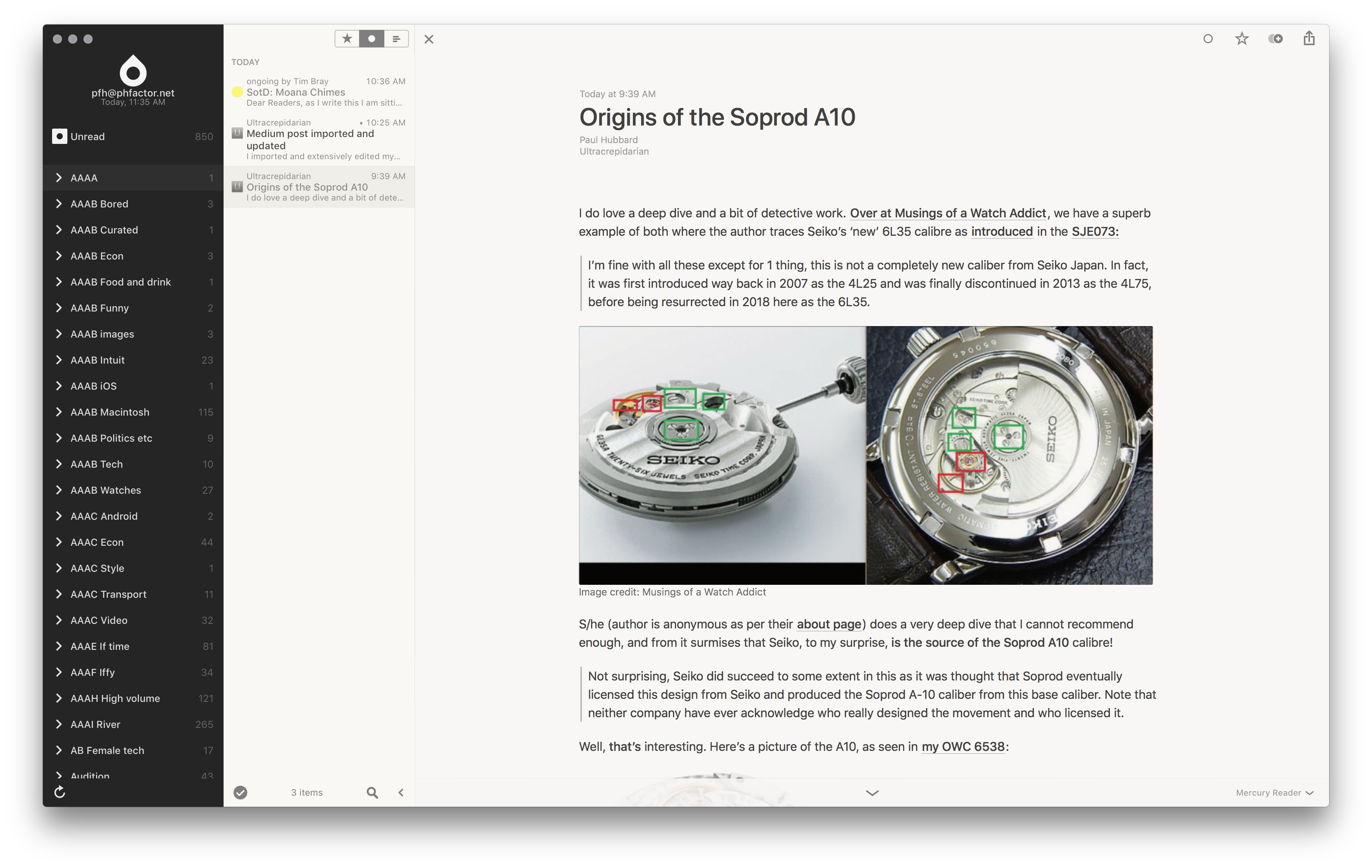 For Android, I recommend my very own open source app Meltdown if you, like me, have a Fever server. 😉

So in the morning I open and read a set of tabs, and during the day I open Unread in spare time to read. Since RSS is synchronized on the server, when I go back to my laptop I don’t see the same stories; super convenient.

If there’s something I need to follow up on, I often just the low-tech approach of sharing the link from the app and email it to myself. I also use Instapaper and it’s native app, though switching apps bugs me a bit. I’m odd that way.

I subscribe to NYTimes, pay for apps and am a Patreon supporter of my favorite comics. I buy printed comics books too to support the authors, and I’m an annual supporter of favorite sites like Naked Capitalism, Washington Monthly and Truthout. I’m happy to pay for news and such, but I believe quite strongly that I need not tolerate relentless monetization and [censored] annoying ads.