In San Diego, we have decent ISP options, and for a while we even had the possibility of Google Fiber. (That would have been awesome.) I’ve been on Spectrum, FKA Time Warner, for a few years at 300/25Mbit, and today a technician came by, swapped out our cable modem and upgraded us to “up to 940Mbit.” The Spectrum page with availability check is here.

Upload speed unspecified, and the ‘up to’ is never good. The price is 125/month, but there’s a $20 discount for a total of $105 a month with taxes, which is the same price I’m paying now. You do have to pay $200 for a technician visit, but I can get over that.

The other local ISP of interest is AT&T, who in some areas has full, symmetric gigabit. Not our area yet, though.

Anyway, it looks like the money I saved on my EdgeRouter X has bitten me. It was a $50 replacement when my ER-3 Lite died, and I knew when I bought it that it maxed out under 400Mbits. Sure enough, today I ran some speed tests, and also a BitTorrent download of the Ubuntu ISO and even on wired gigabit I’m “only” seeing around 350Mbit by 45Mbit:

During the test, the CPU on the router hit 100% – there’s the problem! 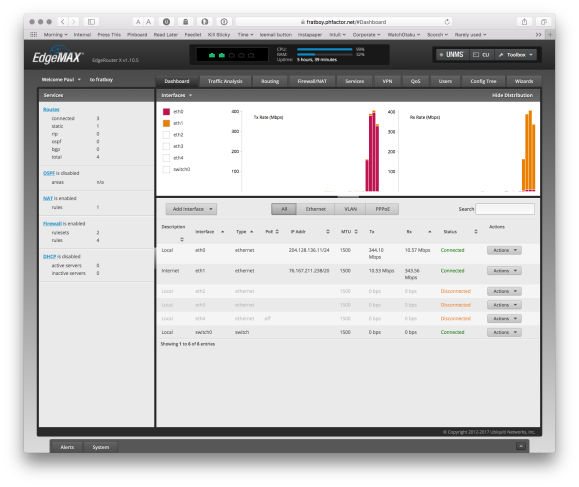 Meh, I say, meh. This MUST BE FIXED IMMEDIATELY. Off I went to the Ubiquiti router comparison page:

The ER-4 is new, and looks great – still silent and fan-less, more power (13W vs 5) but not too bad, and much faster. Amazon has them for $166. I’ve ordered one, and if that helps then it’ll be money well spent. I think I made the right call with the ER-X, as the ER-4 wasn’t out yet. If not, well, hmm. That’d require more work and research.

More info for the curious: I tried disabling DPI in the ER-X, but it made under 10% difference, and the other thing I’ll try is doing the speed tests directly from the laptop to the modem. The tests that I used are HTML5 speedtest and Speedtest.net.

I enabled hardware offload and re-ran the tests. A tiny bit faster, and now no CPU problems, but where’s my speed?

And when I plugged my laptop directly into the modem, voila:

Still not full gigabit, but much better. Uploads peaked over 100Mbit too:

So I think I’ll try the ER-4 and see how it does. Odd that others on the net had better luck with the ER-X, though. 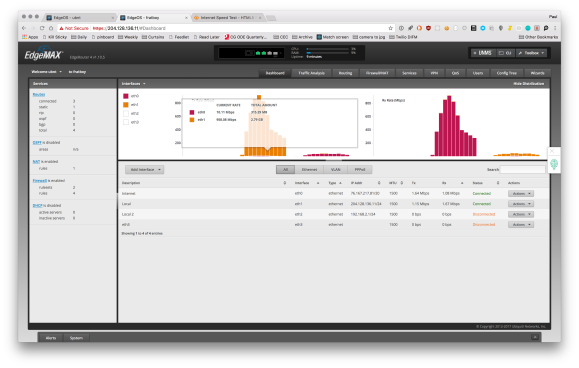 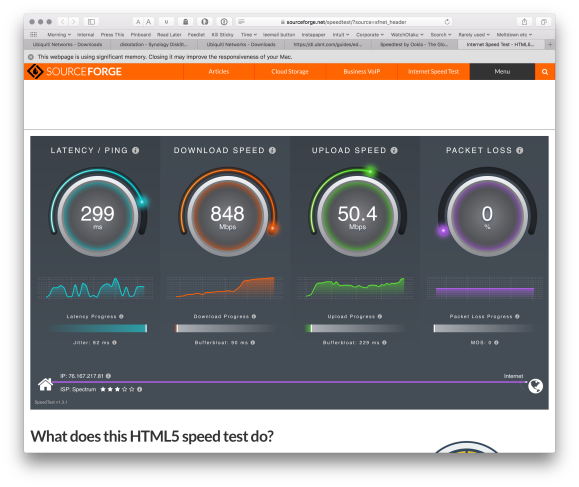 Mind you, this is testing at peak Internet time, Friday evening, so I suspect I’m limited elsewhere. So far it looks great as far as speed. I wasn’t able to restore my old configuration onto the new router, so I’m in for a couple of hours of tedium tomorrow recreating the dynamic DNS setup, but that’s not terrible.

[…] now that I’ve got “Gigabit” home Internet I’m doing reading about WiFi, because my WiFi tops out around 400ish megabits (45MB/sec) of […]

This site uses Akismet to reduce spam. Learn how your comment data is processed.