I had a couple of complaints about the previous theme, so now you’re looking at the Twenty Twenty (free) theme. I wanted a cleaner page, with full posts and fast page loads. The header is uglier, alas.

What do you think?

For several years, I created and maintained a Wiki-based site called WatchOtaku.com. It was a fun exercise, and I still like how well wikis work for this sort of heavily-lined content, but as of Sep 2019 I’ve taken it down. I exported the entire site as HTML and am hosting it for your reference on my server. Most of the content is less relevant, e.g. current vendor lists, but perhaps after being indexed it might sometimes be useful.

If I am ever bed-ridden but able to type, I’ll tackle the task of collating watch lists and reviews. There are a lot of them and my hobby time is limited; for now I’ll content myself with the archive.

Please note that, in a shitty display of lost data and missing features, Confluence cannot export blog posts so all of my hard work there is just lost. Yeah, I’m angry too. Another reason to stop paying Atlassian.

Update: Well goddamn it. I can’t see blog entries older than 2011, even though they’re available via URL. Hey Atlassian, this sucks.

The latency varies quite a lot, and it’ll download even faster sometimes. I’m feeling like that I’m getting the bandwidth that Spectrum advertises, which is nice. Sorry Dan, I wish Australia had more sane policy on broadband. 😉

So I got an interesting email today, a polite request to remove some content that is under embargo for a while. I’ve done so.

I’ll tag this post as 451, for obvious reasons, but this instance was a reasonable request that I’m only mildly sad to fulfill. I’m not trying to be an investigative reporter here, in this case I was doing a bit of searching and posting about what I had found.

I’ll update when the embargo is lifted or there’s related news.

Bad snaps of the new modem and router: 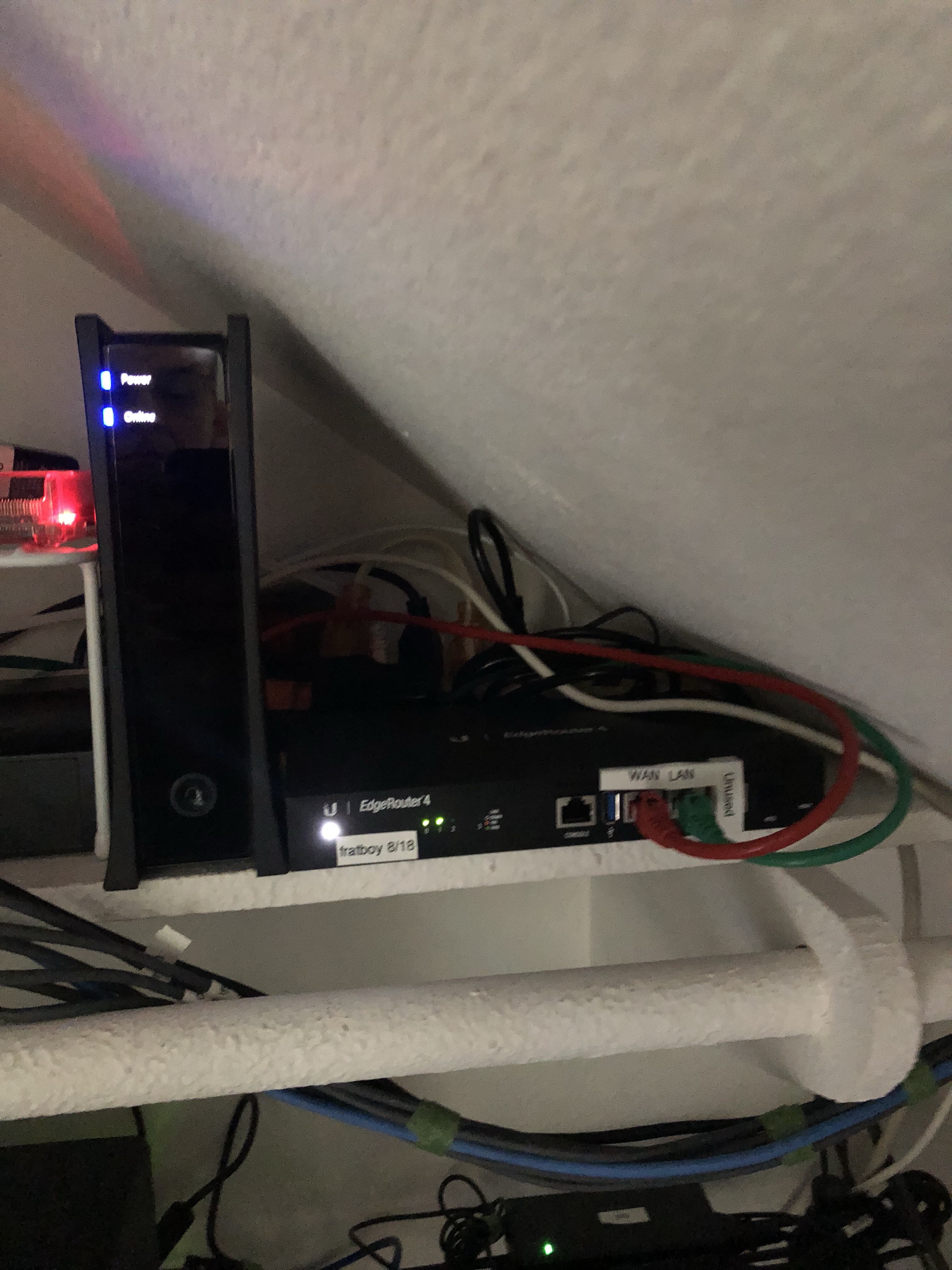 Now to figure out max throughput on WiFi!

In San Diego, we have decent ISP options, and for a while we even had the possibility of Google Fiber. (That would have been awesome.) I’ve been on Spectrum, FKA Time Warner, for a few years at 300/25Mbit, and today a technician came by, swapped out our cable modem and upgraded us to “up to 940Mbit.” The Spectrum page with availability check is here.

Upload speed unspecified, and the ‘up to’ is never good. The price is 125/month, but there’s a $20 discount for a total of $105 a month with taxes, which is the same price I’m paying now. You do have to pay $200 for a technician visit, but I can get over that.

The other local ISP of interest is AT&T, who in some areas has full, symmetric gigabit. Not our area yet, though.

Anyway, it looks like the money I saved on my EdgeRouter X has bitten me. It was a $50 replacement when my ER-3 Lite died, and I knew when I bought it that it maxed out under 400Mbits. Sure enough, today I ran some speed tests, and also a BitTorrent download of the Ubuntu ISO and even on wired gigabit I’m “only” seeing around 350Mbit by 45Mbit: 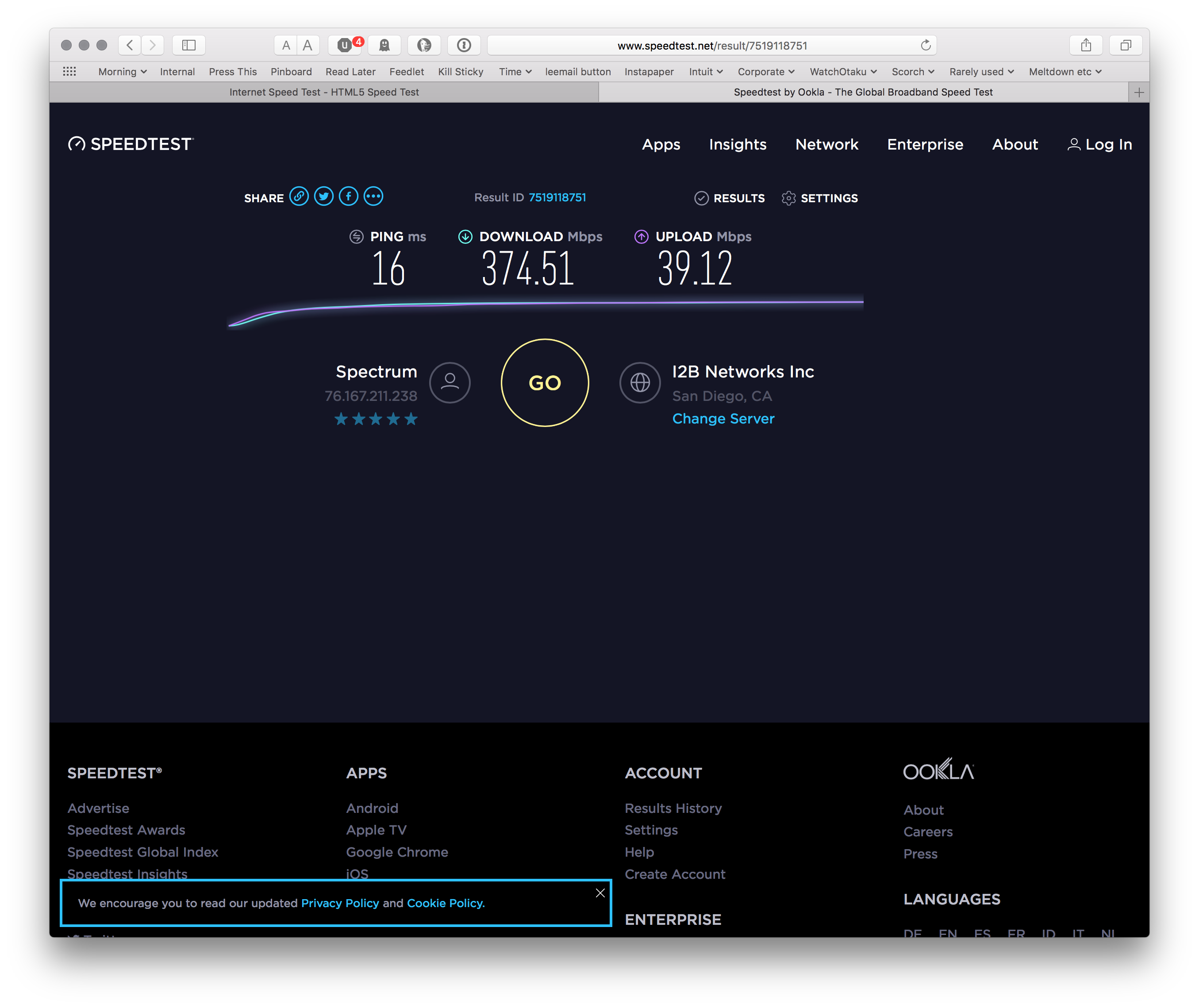 During the test, the CPU on the router hit 100% – there’s the problem! 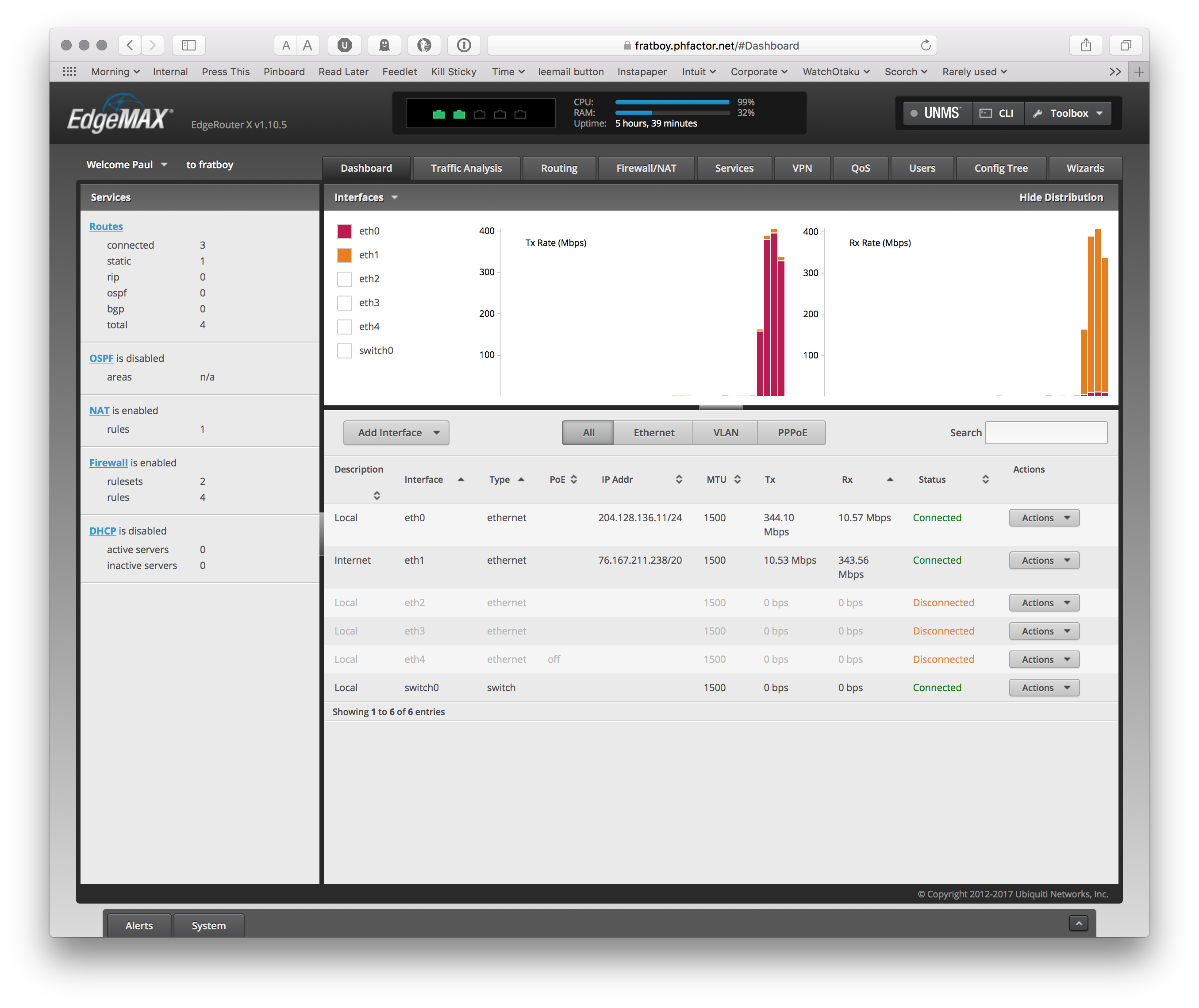 Meh, I say, meh. This MUST BE FIXED IMMEDIATELY. Off I went to the Ubiquiti router comparison page:

The ER-4 is new, and looks great – still silent and fan-less, more power (13W vs 5) but not too bad, and much faster. Amazon has them for $166. I’ve ordered one, and if that helps then it’ll be money well spent. I think I made the right call with the ER-X, as the ER-4 wasn’t out yet. If not, well, hmm. That’d require more work and research.

More info for the curious: I tried disabling DPI in the ER-X, but it made under 10% difference, and the other thing I’ll try is doing the speed tests directly from the laptop to the modem. The tests that I used are HTML5 speedtest and Speedtest.net.

I enabled hardware offload and re-ran the tests. A tiny bit faster, and now no CPU problems, but where’s my speed?

And when I plugged my laptop directly into the modem, voila: 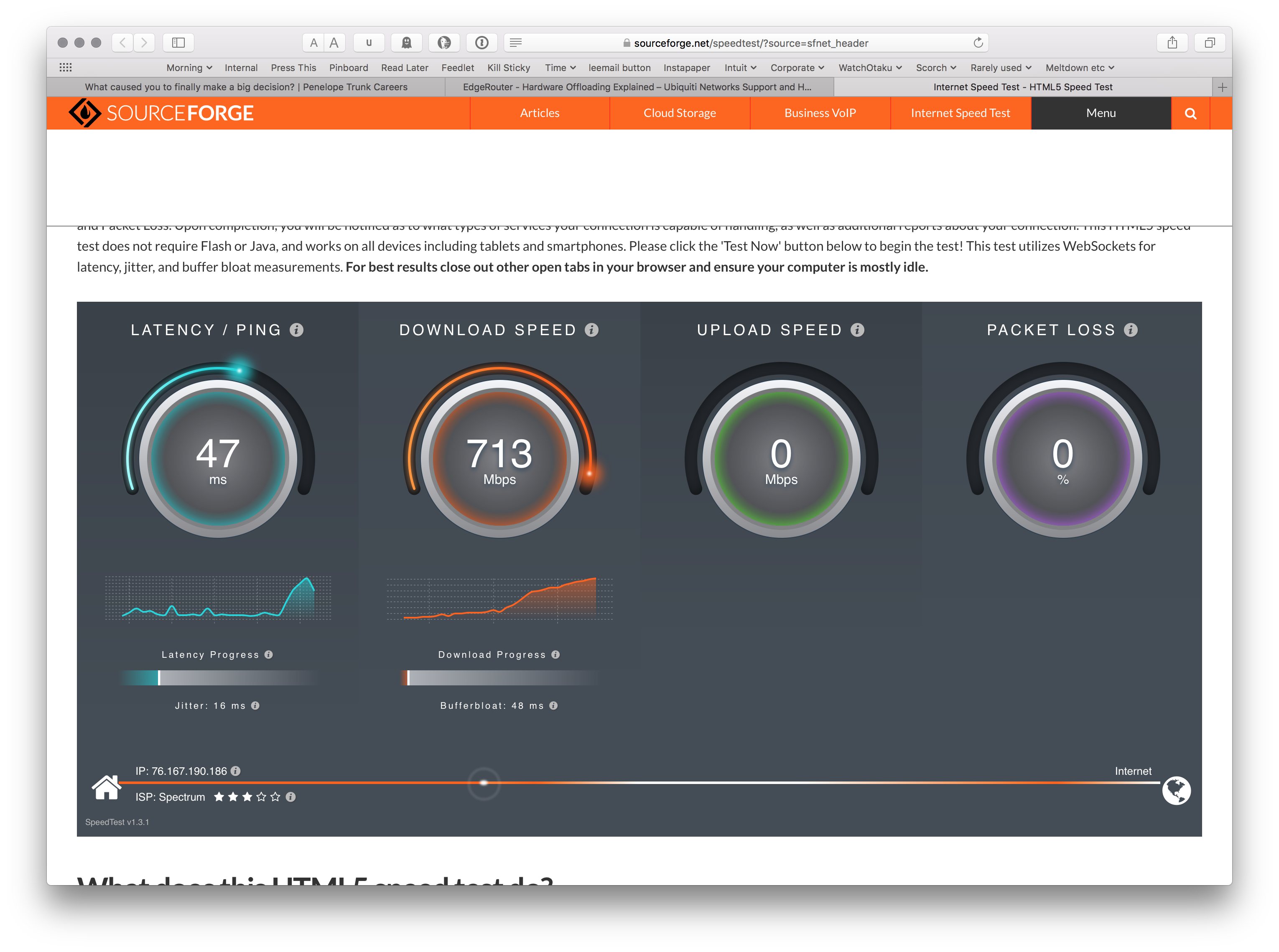 Still not full gigabit, but much better. Uploads peaked over 100Mbit too:

So I think I’ll try the ER-4 and see how it does. Odd that others on the net had better luck with the ER-X, though.

Mind you, this is testing at peak Internet time, Friday evening, so I suspect I’m limited elsewhere. So far it looks great as far as speed. I wasn’t able to restore my old configuration onto the new router, so I’m in for a couple of hours of tedium tomorrow recreating the dynamic DNS setup, but that’s not terrible.

I imported and extensively edited my Medium post Urban surveillance in San Diego. Medium was an experiment and, while I got picked up by HackerNoon, I hate the monetization that Medium is doing so I imported it here, added more links, FLIR images and a discussion of the law.

So for years, I had a self-hosted blog, running WordPress on my Debian server at home. I still have a family-only blog running that way, but my fnord.phfactor.net was, frankly, a pain to keep running. Comment spam, exploits, maintenance, etc. I tried static sites and discovered that desktop-only authoring was a blocker.

So I’ve been quiet for a few years, with notable exceptions that I’m now also tired of maintaining. I do, however, quite like to write and share, so today I bit the bullet and paid for a personal plan here on WordPress, plus a paid theme. Let’s see how this goes; the total out of pocket for the first year was $48 for the WP and $45 for the theme; enough that it should remind me to post but not enough to annoy my spouse.

So let’s see how this goes!